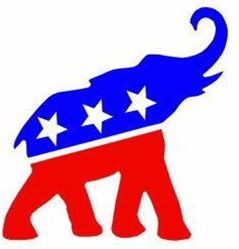 Party adopts "In God we trust" as its official motto

Move follows one week after Yamhill County Republicans do the same

DALLAS, OR—“In God we trust” became the official motto of the Polk County Republican Party at the July 12 general meeting. The resolution making it so was unanimously approved by the body.

Along with the Yamhill Republicans passage of this resolution may be a first for any political party in any state, at any level—to adopt the slogan—in the history of our Republic.

“Whereas, “In God we trust,” was adopted as the official motto of the United States Joint Resolution by the 84th Congress (Pub.L. 84–140) and approved by President Dwight Eisenhower on July 30, 1956; and

“Whereas, “In God we trust” has appeared on paper money since 1957, as well as coins; and

“Whereas the final stanza of the U.S. National Anthem reads “In God is our trust,” and

“Whereas, the motto does not violate the First Amendment concerning respecting “an establishment of religion,” (as it is not giving a government preference to any religious institution); and

“Whereas, the State of Florida equally adopted “In God we trust” for its motto in 2006; and

“Whereas, without God’s assistance, the United States has no hope of keeping its freedom; and

“Therefore, the Polk County Republican Party adopts the phrase “In God we trust” as its official motto; and will honor our Creator with implementation of the phrase to be placed at the bottom of the party’s name on its website and all new banners, flyers and brochures created for the party’s outreach at fairs.”

While President Trump has been censored on Twitter, he is communicating on his own platform. Social media Gab is picking up these messages in REAL TIME. Click the picture of the President above to see them in real time!

Why is Google dangerous?

...AND THE STATE PARTY PLATFORM

What Oregon Republicans agreed to stand for